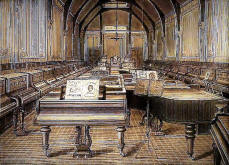 THROUGHOUT the musical instrument industry of the United Kingdom there is no single firm with which we are acquainted that can justly claim so distinguished a place by reason of antiquity and great manufacturing achievements as the world-renowned house we indicate at the head of this sketch.

The ancestors of the present head of the concern were the makers of the first piano­forte made in England, and it is interesting to note that Messrs. POHLMANN & Co. still possess among their treasured relics the identical 5-octave instrument which Johannes Pohlmann made in 1768.

They have also instruments manufactured by all the leading houses in the trade, whether British, American, or continental. The mere enumeration of the makers whose productions are represented in Messrs. POHLMANN & Co.'s showrooms would fill more space than we can afford in the present review, but we may mention the fact that the firm control no fewer than eighteen sole agencies, representing the cream of the world's musical instrument manufactories.

The utmost choice is thus afforded to the intending purchaser, who may rest reliant upon the fact that an inferior instrument has no place in the another pianoforte, also made by Johannes Pohlmann in 1773, and possessing a special interest from the fact that Gluckused it during the composition of this "Armida" and other works.

The firm of Messrs. POHLMANN & Co. have extensive pianoforte manufacturing works in Brunswick, the old and original manufactory being situated at Halifax, Yorkshire, and a very extensive business is carried on.

The head of the concern is Mr. George H. Pohlmann, who is the sole proprietor, and personally superintends the business.

The Dublin showrooms in Dawson Street are among the finest of the kind we have ever inspected. They are elegantly fitted up, perfectly lighted from the roof by Stott's new patent reflex light, and are stocked to repletion with every class of musical saloons of the firm, however cheap it may be.

Indeed, in order to guarantee the excellence and perfect character of every instrument sold, all are personally examined by Mr. Pohlmann before they are permitted to leave the warehouses of the firm.

But of Messrs. POHLMANN & Co.'s own productions we desire to say something. The firm have always enjoyed the reputation for being progressive, and certainly no piano manufacturing house has made a greater number of successful experiments in the improvemant of the pianoforte than they; and the results of their constant study, research, and practical trial of new ideas are strikingly manifested in the superb instruments now sent out under the name of "Pohlmann." They control a great number of valuable patents, and, with the exception of Messrs. Erard, of London, they were the first in England to make piano­fortes with 7 ½-octave keyboards.

The new construction of pianos with full iron frames was introduced into England in 1870 by Messrs. POHLMANN & Co., and in 1871 they were the first to use the overstrung bass in the upright pianoforte. "They are," says a recent reviewer in the Industries of Yorkshire, "the inventors and patentees of the newest construction in horizontal and upright 'grands, viz., their on double frame cast in one piece (corrugated), with suspended sound boards, and the excellent equaltension bridge."

Double sound boards, made on a similar principle to violins, are used in some of Messrs. POHLMANN'S patent "paragon" upright grands (as sold to Mr. Sims Reeves), and two other notable specialities consist in the protected "no ise­less" pedals for pianos and the silverized, non-corrosive "harmonic" piano wire, which was first used by Messrs. POHLMANN in 1884, and which i s now supplied to many of the largest piano-makers. For this wire the firm claim a superiority in every respect, and the difference in cost is trifling.

Messrs. POHLMANN have won many prize medal sand other awards for superiority of tone, touch, and workmanship, and, from their wonderfully cheap, durable, and most satisfactory school pianos to their superb horizontal grands at ninety-five guineas and upwards, every instrument produced by the firm embodies artistic and musical qualities of a high order and exhibits conspicuous merits of design and finish.

To any purchaser who desires a really high-class instrument at a medium price we can strongly and confidently recommend the firm's productions. Messrs. POHLMANN & Co. make every instrument of the best and most reliable materials, having but one object in view—to produce an irreproachable pianoforte at the lowest cost consistent with genuine intrinsic excellence.

The easy payment or three years' system of hire and purchase is applied to all classes of instruments. American organs, too, form a prominent feature in connect ion with the firm's business operations; indeed, Messrs. POHLMANN & Co. were the first to introduce the American organ into Ireland, and the fact that at the present time they possess the sole agency for the Karn Organ Co., the Palace Organ Co., and the Packard Organ Co. —three of the largest American organ manufacturing concerns extant—taken in conjunction with the fact that Messrs. POHLMANN & Co. sell more American organs at their Dawson Street depot than all other music sellers combined, affords striking evidence that the house still retains its pre-eminence in this department of the musical instrument trade.

Messrs. POHLMANN also carry on an extensive tuning business, a large staff of efficient tuners being employed, while an equally experienced staff of workmen in connection with their manufactory is employed in the repairing departments of the concern.

The music department is under entirely new management, and the stock Comprises all the latest musical publications, so that all their patrons may rely on orders being promptly executed; and they hope, by their careful attention, to merit the continued and increased orders of their numerous friends and the public generally.

The business throughout is ably and enterprisingly conducted, and, as a depot for every requirement usually associated with the profession of music, it has undoubtedly no equal among the rival music emporia of the Irish Metropolis." Dublin, Cork and South of Ireland: A Literary, Commercial, and Social Review, 1892