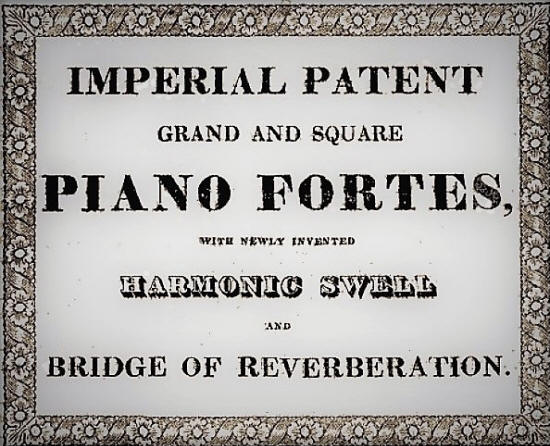 "CLEMENTI and Co. having established a Correspondence with severalof the most respectable Continental Publishers, they have entered into such arrangements as will enable them to supply their friends and the public, at a short notice, with Correct Editions of lhe most esteemed Productions from the Foreign Musical Press.

It having been long a desideratum that some principle should be applied to Musical Instruments to prevent the rapid destruction produced on them by hot and damp Climates, CLEMENTI & Co. 26, CHEAPSIDE, LONDON.

Beg leave to inform Merchants and Families about to reside in the East or West Indies, that they have at length brought to perfection an invention by J. Donnithorne, Esq. a scientific English gentleman of Furrukabad, in Hindoostan, for the structure of Horizontal Grant Piano-Fortes - (as well those with the common extra keys as those of their late improvements with additional keys to FF) by which they are scarcely more affected in those climates, than Instruments of the usual construction are in the most temperate regions.

The caution universally observed in the East Indies, of keeping the instrument considerably below the proper pitch, needs no longer to be resorted to; for the Piano Fortes, as now constructed by Clementi and Co. on Mr. Donnithorne's plan, may be kept even above Concert pitch without the least risk of endangering their excellence or durability.

By this invention, the Case is effectually prevented from warping; the instrument will keep in tune much longer; retain its original brilliancy of tone; and be in a state of high preservation, when those of the usual structure are no longer deemed fit for use. Liberal Allowance to Merchants. GRAND AND SQUARE PIANO-FORTES, Thus Improved, Are now open for Inspection at CLEMENTI and Co.'s Wholesale and Retail Warehouse, No. 26, Cheapside.

CLEMENTI & Co. PATENT PIANO FORTE MAKERS TO THE KING, AND, Musical Instrument Makers to the Hon. East India Compagny, 26, CHEAPSIDE, LONDON, the suggestion of certain eminent musicians, a celebrated mathematician was induced some years since to direct his attention to the enriching of the tone of piano fortes by the aid of harmonics; but his designs were never carried into effect, from the great expence which would have attended their execution.

CLEMENTI and CO. have, however, the satisfaction, to announce to the public, that by their present patent invention, they have been enabled to obtain this desirable improvement, at the addition of a comparatively trilling cost.

By the "bridge Of Reverberation," the strings have the effect of being fixed, like those of a harp, to the sound-board itself, instead of being checked by an immediate attachment to a solid substance.

This contrivance not only produces a more equal and rich flow of vibration, but takes away the whistling of the large steel strings so common and often so disagreeable in grand piano fortes on the usual construction.

It also gives the great advantage of turning ail those portions of the strings beyond the original bridge, which were before useless, to the augmentation and perfection of the tone produced on the main body of the instrument, by means of the Harmonic Swell.

In expressive movements and legato passages the addition of the harmonics, independent of the beauty of sound, procures an advantage which must be obvious to every one, since it effects that continuity of vibration which, somewhat like the bow of a violin, makes one note glide into another; and as this effect is produced without at all interfering with the dampers, the bass may be played staccato whilst the treble is played legato, and vice versa.

The whole volume of tone called forth by the harmonic swell and damper pedal combined, is of extraordinary richness and power; and in passages requiring bold contrast, dramatic energy, or sustained grandeur, will be found of singular efficacy.

The great improvement given by this new construction also to the extra additional keys in the treble, must be considered very important, since all the great Continental composers and performers now employ them so very frequently in passages of brilliant effect; and since they are found so highly useful not only for duets by two persons on the same instrument, but for giving the master an opportunity of marking the character of passages above, whilst the scholar is practising them in the octave below.

The additional pedal for fixing the keys on two strings will be found very convenient, as it leaves the feet to be employed on the harmonic swell and damper pedal during a delicate strain, or for the purpose of accompaniment.

The simple principle on which the improved grand piano forte cases are constructed is of such efficacy as to resist an immensely greater force than the most extensive compass of string can possibly produce. The advantage of this in keeping the instrument in tune and counteracting the effects of climate^ are sufficiently obvious.

CLEMENTI and CO. are happy in being able to produce so powerful a testimony in favour of their improvements, as the following extract from "The Quarterly Musical Review," a work so widely circulated and so well known for the acumen of its musical criticism, its profound and extensive information, and the liberal and philosophical spirit with which it is conducted.

M A Patent (for the United Kingdom) for improvements on piano fortes has been recently obtained by Mr. W. F. Collard, of the house of Clementi, Collard, and Co. London.

"From the long and deep attention there has been bestowed on the structure of piano fortes, and the eminent success with which every hint for their improvement has been pursued, we were not prepared to expect any invention that might add to the general powers of the instrument, although among the prodigious assistances mechanics are able to lend to art, we should not have doubted that there might be yet some particular parts susceptible of a superior construction.—

The object of Mr. Collard's invention is however general, and it imparts not only a new and richer degree of tone, but it submits a choice of fresh varieties and degrees to the player, which can hardly fail to call forth novel and beautiful effects in performance.

"Freedom of vibration, power, richness and equality of tone, being the great and essential qualities to be desired in piano fortes, the attention of the Patentee appears to have been directed generally to the discovery of some principle by which these requisites could be obtained in a higher degree than by the plan hitherto employed in their construction.

The mechanism used having been already brought to a very high degree of excellence, it seemed manifest that if the qualities sought after could at all be produced to the extent desired, they must either result from a new construction of the sound-board, or from the mode of applying the strings, or from both means combined."

The variety of effect being noticed in other places, may for brevity sake be omitted here.

"The mechanism of each description of piano fortes now commonly in use he leaves nearly in the same state as that employed by the most eminent manufatv turers, so that the performer has no new difficulties whatever to encounter from the application of Mr. Collard's inventions.

*The cases or frame-work of grand piano fortes he constructs on a simple principle, of so great strength as to enable them,to resist the effects of climate and a far greater power than the combined pull of the strings produce. The improvement that is the basis on which the other is founded, is an additional bridge on the sound-board, not for the purpose of regulating musical intervals, but of augmenting the duration of the vibration, and consequently increasing and beautifying the tone.

This bridge, which he calls the bridge of reverberation,' is placed at a regulated distance on the sound-board; and the important advantage resulting from it is, that the motion given to the principal part of the string by the impulse of the hammer, is kept up by the bridge of reverberation, instead of being suddenly checked by an attachment to an unyielding substance.

The prolonged vibration produces an extraordinary purity, power, and continuity of sound somewhat resembling the richness of an octave below.
"From this essential improvement the Patentee's second invention is derived, which is as follows :

— "On the old plan of passing the strings directly from the side of the case to the original bridge on the sound board, it became necessary, in order to prevent the jarring noise of those portions of the wire which lie between them, not only to place some soft substance on the top of the moulding, but also to weave a piece of cloth between the strings.

"The second improvement, which the Patentee calls the Harmonic swell, substitutes a novel action for those portions of the string which lie between the two bridges, yielding most sweet and melodious tones. The performer, by lifting a valve, is enabled to elicit those harmonious sounds through a well-known sympathetic relation between accordant strings, without touching those portions of the strings which produce them.

The augmentation of sound caused by this means, resembles in some measure the effect of lifting the dampers, but without producing the same confusion, since every note on the body of the instrument is regularly damped as the performer lifts his finger. By this apparatus a threefold power of augmenting the sound is acquired; whereas instruments of the common construction have but the one caused by lifting the dampers.

"The first augmentation of power is by lifting the harmonic swell.

"The second — by dropping the harmonic swell and raising the dampers.

"The third — by raising the harmonic swell and the dampers together. By the last means the performer adds all the tones which are sympathetically elicited from the strings between the original bridge and bridge of reverberation, over and above all that can be produced on instruments of the common construction, and the effect is accordingly of extraordinary richness and power.

"These inventions are alike applicable to upright, cabinet, and square piano fortes; the latter of which acquire by this new mode of construction much of the richness and depth of tone peculiar to grand instruments.

"The improvements, as simple in themselves as their effects are striking, enable the player greatly to extend the variety of his performance, and are acknowledged by the first professional judges to have given a new character to the instrument of the most effective kind.

That which we heard appeared to us to produce the kind of prolonged tone which arises in a room of fine resonance, and the power was certainly vastly augmented.

Upon the whole, the inventor seems to have accomplished far more than could have been expected, after the very high state of improvement the piano forte had already attained." Quarterly Musical Review, No. XL." An Appendix to the Catalogue of 1816 published by Clementi & Co Manufactures, 1816-18, p. 18-21 and Imperial Patent Grand and Square Piano Fortes, with Newly-invented Harmonic, 1830, p. 1-3